Much of the African continent faces frequent and devastating climate extremes with far-reaching economic and social consequences. These extremes are mainly related to a lack or an excess of rainfall over wide regions, often affecting the livelihood of millions, with a profound impact on rain-fed agriculture and pastoralism, water and food security, and public health.

Role of the Indian Ocean

During the last 30 years, the Horn of Africa has experienced a persistent decrease in rainfall during the March-May “long rains” season, the primary rainy season for the region. This has had major consequences for regional food security, where agriculture largely depends on rainfall and is thus highly vulnerable. Establishing whether this drying trend is unusual requires past climate information that extends beyond the instrumental record. In Tierney et al. (2015), we present a detailed record of changes in regional temperature and aridity in the eastern Horn of Africa region (Somalia, Djibouti, and eastern Ethiopia), which places the recent drying in a historical context.

We show that the rate of drying in the Horn of Africa during the 20th century is unusual in the context of the last 2000 years. It is synchronous with recent global and regional warming, and therefore may have an anthropogenic component. In contrast to 20th century drying, climate models predict that the Horn of Africa will become wetter as global temperatures rise. The projected increase in rainfall mainly occurs during the September–November “short rains” season, in response to large-scale weakening of the Walker circulation. Most of the models overestimate short rains precipitation while underestimating long rains precipitation, causing the Walker circulation response to unrealistically dominate the annual mean. Our results highlight the need for accurate simulation of the seasonal cycle and an improved understanding of the dynamics of the long rains season to predict future rainfall in the Horn of Africa.

Pastoralist households across East Africa face major livestock losses during drought periods that can cause persistent poverty. For Kenya and southern Ethiopia, an existing index insurance scheme aims to reduce the adverse effects of such losses. The scheme insures individual households through a seasonal forage scarcity index derived from remotely-sensed vegetation time series. Until recently, insurance contracts covered animal losses and indemnity payouts were consequently made late in the season. Due to demand for asset protection insurance (pre-loss intervention), in Vrieling et al. (2016) our aim was to identify earlier payout options by shortening the temporal integration period of the index using remotely sensed data from the Moderate Resolution Imaging Spectroradiometer (MODIS). Our analysis shows that insurance payouts could be made 1-3 months earlier compared to the current index definition. This would allow pastoralists to use indemnity payments to protect their livestock through purchase of forage, water, or medicines.

Interannual climatic variability over a large portion of sub-Saharan Africa is under the influence of ENSO. Extreme variability in climate is a threat to rural livelihoods in sub-Saharan Africa, yet the role of ENSO in the balance between supply and demand of net primary productivity over this region is unclear. In Abdi et al. (2016), the impact of ENSO on this balance is analyzed in a spatially explicit framework using gridded population data from the WorldPop project, satellite-derived data on net primary productivity supply, and statistical data from the United Nations. Our findings highlight the importance of accounting for the role ENSO plays in modulating the balance between supply and demand of net primary productivity in sub-Saharan drylands. An important implication of these findings is that increase in net primary productivity demand for socio-economic metabolism must be taken into account within the context of climate-modulated supply. 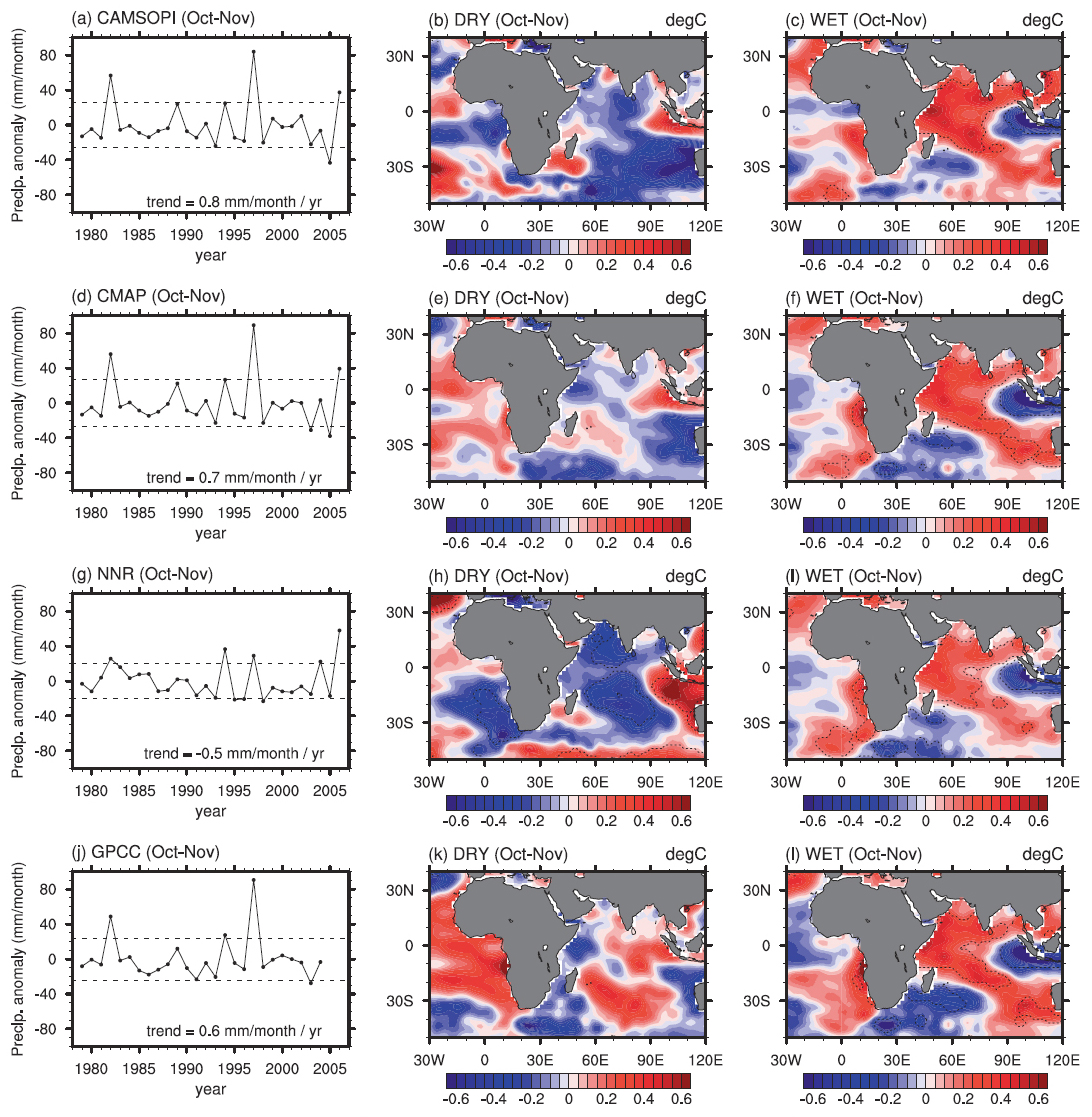 (left) Time series of East African rainfall averaged over October-November for the period 1979-2006, with ±1 stddev indicated (dashed horizontal lines). SST anomaly (˚C) for the (middle) extreme dry and (right) wet years, determined as those exceeding ±1 stddev in the respective rainfall time series. (top) to (bottom) Different precipitation products such as CAMSOPI, CMAP, NNR, and GPCC, with the linear trend removed from each time series, indicated at the bottom of the left-hand panels. (From Ummenhofer et al. 2009)
Scroll To Top